New production methods and uses are making aluminium a material of choice for European policymakers looking to decarbonise the economy. But a flood of cheap carbon-intensive aluminium from China could complicate these efforts.

An energy-intensive industry, the aluminium sector has been subject to the EU’s Emissions Trading Scheme (ETS), which forces big polluters in Europe to buy credits on the EU carbon market.

At the same time, aluminium has attracted policymakers’ attention for its decarbonisation potential – both as a lightweight material for sectors like the automotive industry and  because new production processes have helped reduce emissions from aluminium plants.

But just as these efforts are starting to pay off, a new obstacle has come up: the US-China trade war. New American tariffs on aluminium imports – which affect both Chinese and European producers – are pushing all the excess Chinese production into Europe, flooding the market.

China is now the world’s biggest producer of aluminium. But its production is up to three times more carbon-intensive than aluminium made in Europe, mainly because the electricity taken from the grid in China is largely generated from coal.

As the European Commission readies its assessment of just how much the US tariffs and Chinese imports are impacting the EU market, the industry is warning that the end result could hurt Europe’s efforts to decarbonise.

Dealing with imports in a way that respects international trade rules could be a difficult task, however.

Today, China accounts for 57% of global aluminium production, up from just 10% 15 years ago. The reason for the rapid growth is that China has heavily relied on aluminium to supply its building boom. But Beijing’s five-year plans for how much aluminium the country would need proved to be incorrect. While growth slowed, investments into aluminium didn’t. So the excess production is now being exported to the rest of the world, and now that it can’t go to America, it is flooding into Europe.

“In China, a lot of aluminium is built around a captive coal plant,” explains Per Klevnäs, an economist with the consultancy Material Economics, who has been looking closely at the decarbonisation potential of aluminium.

“The issue is that lots of cheap carbon-intensive aluminium is available to buy now,” he continued. “Aluminium is a truly global commodity. Where it came from isn’t relevant in today’s markets. Whether you release 22 kilos to make one kilo of aluminium [in China] or you release four kilos [in Europe], the buyer pays the same price”. 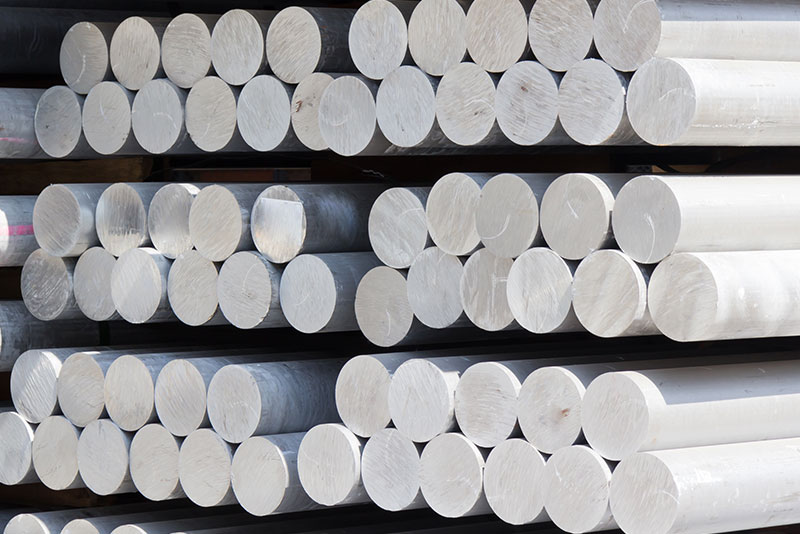 So what makes aluminium produced in Europe so much less carbon-intensive? For the moment, it has little to do with the plants themselves and more with the electricity grids they’re drawing power from.

“Aluminium has a high use of energy, however not necessarily by producing its own CO2,” says Gerd Götz, director-general of European Aluminium, a trade association. “We are using electricity [in Europe], so we depend on the energy mix we get. That’s a very different situation globally.”

“In the northern part of Europe, we’re using hydropower. In France, we go on nuclear. But if you go to regions where we have high coal, then you go up in your carbon footprint,” Götz explained.

Because China is using 80% coal-fired energy, European plants emit overall one third less, even if some plants in Europe are running on coal power. As the carbon footprint of Europe’s energy system goes down, so too will the carbon footprint of aluminium production. That makes aluminium different from other materials like steel and glass, which don’t rely as much on electricity.

The use phase of aluminium has also attracted interest from EU policymakers looking to decarbonise the economy. Aluminium is endlessly recyclable as long as it is pure, and when used in transport, it can reduce fuel use by lightweighting vehicles.

Aluminium will also be essential for fitting the batteries of electric vehicles, Götz adds, saying this could make it an important part of the EU’s circular economy strategy.

In the short term, however, the aluminium industry still has an emission problem to tackle.

“Aluminium has two production steps: the smelter is where you make aluminum, the refinery is where you make Alumina,” or Aluminium oxide says Klevnäs. “Even if you get rid of all the emissions from power, you still have four kilos of carbon.”

“Both stages need innovation, but the one you could immediately do something about is alumina production. In this part, you make steam, and there’s no question you can make steam without using fossil fuels, but it’s more expensive.”

In addition to the electricity used in refining, there are process emissions from the smelter. This is where new technologies can step in to make a big difference. For instance, a consortium called ELYSYS, a partnership between Rio Tinto and Alcoa Corporation, has developed a carbon-free smelting process, which is now being tested and scaled up.

They say the use of this new type of smelter could eliminate all direct greenhouse gases from the traditional aluminium smelting process. The technology, being developed in Canada, is expected to be ready for commercial sale in 2024.

“We can have aluminium that’s not really CO2-heavy in 10 or 15 years,” says Klevnäs.

Götz says there have already been improvements in smelters but costs may become a concern.

“There’s a linear development where we have reduced year by year CO2 in different smelters. But then you come to the limits of the process, that’s where we need breakthrough technologies. That’s where we have companies that have mid-term developments that give not only good hope but also a realistic perspective.”

“But this is something that industry can’t do on its own. It’s will require much more than Horizon 2020 programmes where we have well-running projects. Here we need to go into a different scale.”

According to a study published earlier this year by Material Economics, the new technologies for the production processes of these emissions-intensive industrial materials mean that getting to a zero-emissions industry is within reach, but the costs are going to be very high.

And that is why the influx of Chinese aluminium is making it harder for companies to make the necessary investments.

In a world of global competition, where is the incentive?

“In any industry, they’re doing what they’re doing for very good reasons. If you want them to change, you need to give them a better reason to do so,” says Klevnäs.

The Commission has put the market under surveillance since the US tariffs were imposed and will come forward with a report on the Chinese imports by the end of the year.

According to Götz, anti-dumping measures would be “a very clear avenue” to follow. “We see through the surveillance a very concerning picture of growing Chinese imports to Europe in some particular product groups, that’s where we hope the new anti-dumping procedure will also get some grip.”

Others have suggested import tariffs to deal with the issue, and incoming Commission President Ursula Von Der Leyen has said she will table a carbon border tax.

But because these remedies could be subject to international free trade challenges, there could be other methods.

For instance, the EU could say that all aluminium used in Europe has to have a carbon intensity below a certain level. This would not specifically exclude Chinese imports, making the measure WTO-compliant. However, experts say it would likely still present a challenge because Chinese aluminium is so carbon intensive.

As the aluminium industry tries to position itself as a key tool for decarbonisation in the future, the issue of Chinese steel is having a major effect on the debate. The Commission may keep these climate goal issues in mind when making its assessment of the situation later this year.